You may have inherited or purchased a vintage or antique piece of copper cookware and are wondering if it needs any attention before being put to use. At Brooklyn Copper Cookware we stress renewability of our own wares and want to keep any and all copper cookware, no matter the age or provenance, in service doing good work. We’re happy to restore any maker’s wares to like-new appearance and better than new performance.

Please note: We specialize in hand-wiped molten retinning. Generally any copper piece that was originally tin electroplated cannot be relined by the wipe technique. This includes (but is not limited to) partially or fully enclosed kettles, most narrow-necked milk pots, most mokas or Turkish coffee pots, as well as dessert and gelatine moulds. For service on original tin plating, please search “Tin electroplating service”.

What we get from you… and what you get from us.

Do you have pure culinary-grade copper cookware?

It may seem obvious, but the first step is to make sure your pan is pure copper. Many manufacturers take pains to capture the prestige of copper without using much (or sometimes any) of the actual metal. See article. Such cookware is neither copper nor reparable when, inevitably, it fails on the first few uses.

There are also a quite a few “copper-bottomed” or otherwise foil-wrapped wares on the market, which are in fact stainless steel pans dressed in a veneer of copper. While these pans’ copper aspects are gently polishable, the foil is often as thin as regular kitchen aluminum foil and can easily be damaged by aggressive abrasives or mechanical action.

Finally, there is a variety of solid copper cookware lined with tin that is authentically pure, but for all intents and purposes is sub-culinary grade, i.e., “decorative”. The telling signs are copper wall thickness of less than 1mm and tin linings with no visible wipe marks. Such linings are very thinly electroplated. Decorative copper cookware is cold-formed and cold-plated, and would be destroyed in the molten tin retinning process required for culinary grade wares.

Determine what metal the lining is made of

So, your pan is culinary-grade genuine copper. The next step is to determine what’s lining it. Fortunately there are lots of clues. If the rim is solid copper all the way around like the left pan rim in the photo opposite, it is most likely a machined stainless steel or nickel lining. If there is gray or silvery metal on the top edge, however checked or damaged, it’s very likely a hand applied tin (like the pan on the right) or possibly a silver lining.

There is an exception when a pan that calipers around 1mm can still be culinary grade. If the pan is planished (peen-hammered) and feels heavy for its size, it has been toughened and shaped by hammering and is well-suited to culinary applications. Such a pan is unlikely to be nickel-lined, but is easily adequate to hot tinning or silver electroplating.

Of course, hybrids exist are there are exceptions to every rule! If you’re still not quite sure what grade pan or what kind of lining you have, just give us a call. 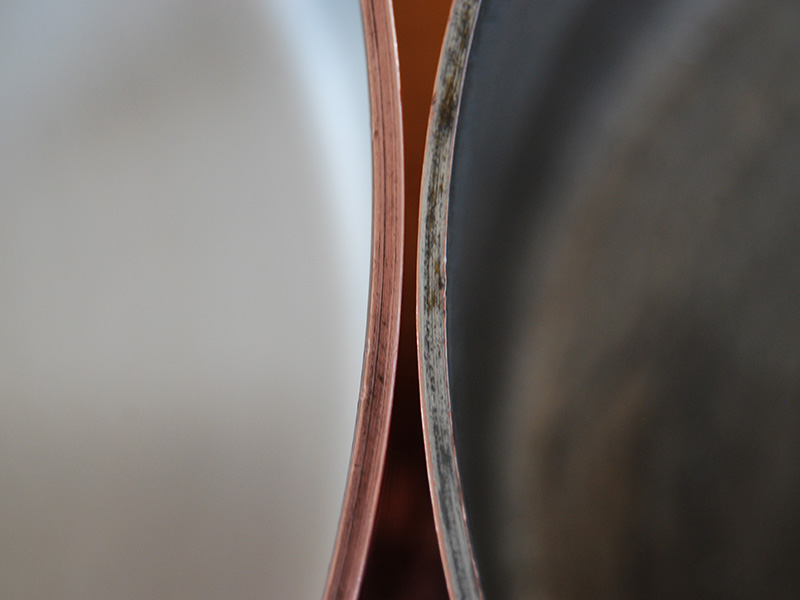 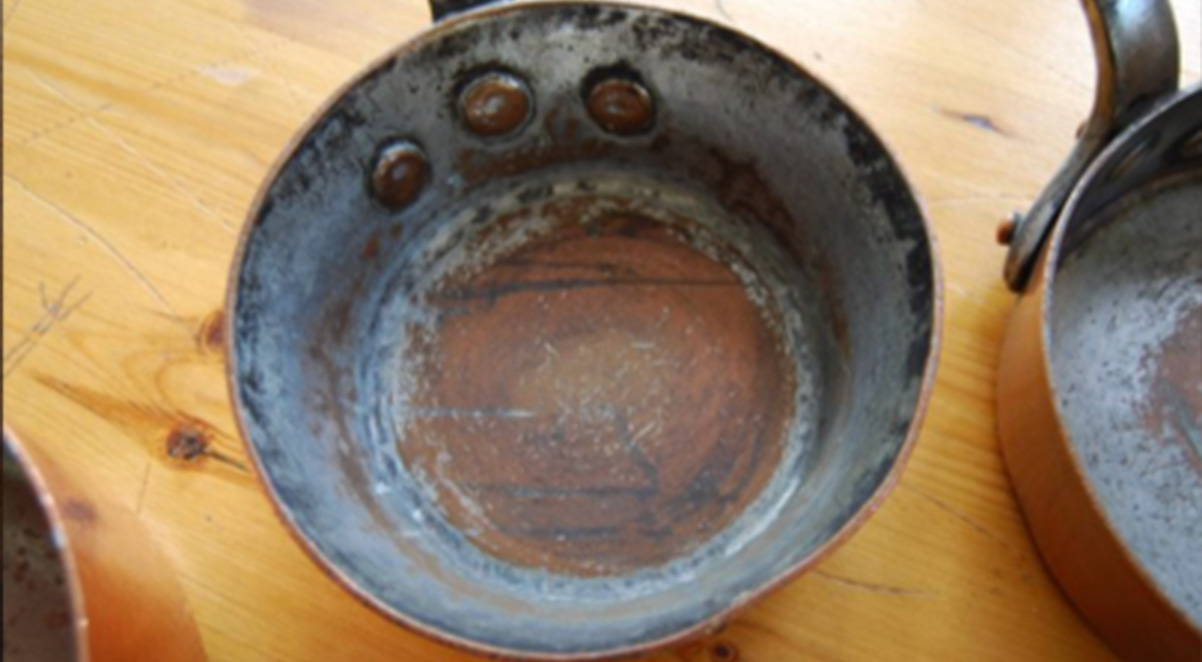 Whether to Retin or Not

Generally, if the lining issues you’re seeing do not penetrate through to the copper pan body, then it’s perfectly safe to use and may yet last many years in regular use. If the damage penetrates to the copper body then we recommend a more watchful posture. Although it takes quite a lot of exposed copper for there to be even slight risks, the copper has to first corrode under fairly concentrated acid preparations to form any of its potentially toxic byproducts, such as copper sulfate and sulfide (“verdigris“, or the green-gray cast characteristic of weathered copper; for example, the Statue of Liberty).

Verdigris is a protective layer for the copper, which chokes off its own advance, but it can transmit to food, especially (again) acidic preparations. Verdigris also imparts a strong metallic flavor, but before it’s concentrated enough to do so it will give you plenty of warning to its presence by being very easy to see – it appears as a bright greenish streak where it’s formed in any wound to a tin lining. The onset of verdigris in a copper pot is a signal that it’s time to get that pot serviced.

If you have any doubt about damage to a tin lining, you can test the lining’s integrity by wiping a bit of undiluted white vinegar on the wound and letting it evaporate at room temperature. If you see any verdigris flecks in the wound you can start thinking about getting a new lining, less so because any potential exposure the verdigris is ipso facto dangerous to you, and more because penetration through to the copper layer indicates the compromise of the tin envelope and the likelihood that tin crystals will start to collapse outward from the wound. Tin itself has no known toxicity (it is, in fact, a micronutrient), so even if a bit of it flakes into food that’s not cause for concern. However, the lining’s disintegration process will begin to accelerate from this point.

If you’re ready to get your cookware back in the game, just fill out our Retinning Work Order form to get started. Should you have further questions or would just like to talk it over, drop us a line anytime.

Brooklyn Copper Cookware is hand-made and finished to order, and we aim for delivery between 10 days and two weeks.

For 2020 holiday delivery please order by Saturday, December 12th – orders placed after this date will be scheduled for shipping once we’re back from our annual break on January 4, 2021.