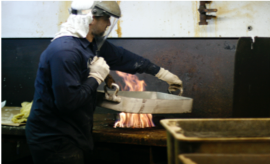 This is a condensed version of a conversation that took place on Chowhound a couple of years back, or I should say, took a couple of years to unfurl completely. Believe it or not, there are more than a few people who take a keen interest in the minutia of kitchenware metals’ behaviors. This posting is in response to that interest.

Hi Everyone,
Dan Moore and I have been chatting as this thread has become a tapestry, and we’re amazed and delighted that there should be such rich discussion on tin lining thickness (nerds love company). Thanks to everyone who reached out off line and encouraged my thinking this subject through – which, mercifully, didn’t require thinking so much as digging up a conversation from several years ago.
In 2013, while BCC was pretty much on its knees and shortly before I met Dan, I got schooled by a BCC fan (a Lindberg Company metallurgist with decades of experience in heat-treating) regarding the possibilities and limits of wipe-applied molten pure tin. There are many resonances of that tuition in the present thread. This person was a customer whom I’d end up disappointing by failing to deliver the large Hammersmith sauté he’d ordered, but with whom I would also end up having a long, rich email exchange that began with my apologies and, weeks later, ended with my thanks. That dialog went a long way toward helping Dan and me eventually recognize each other as kindred copperheads, which, had it not happened, BCC may never have been reanimated.
What prompted my interlocutor’s curiosity (beyond when his order might finally ship) was my assertion somewhere on the original BCC site that our tinning was “extra thick”. He politely inquired after the basis of my claim, and, upon both of us finding it wanting, my interest in unpacking it. My interest piqued (and my ego poked), he then stewarded me on a magical mystery tour of tin’s crystalline dynamics, from which I’ll crib here in the hope of making a useful contribution to this thread while revisiting some things about BCC’s craft that I could stand to freshen for my own sake.
First the upshot: There’s a tight thickness range elegantly and naturally prescribed by the wipe tinning process and by pure tin itself. When deposited in molten form on copper substrate, unalloyed tin’s terminal crystal grain growth is limited to about .45mm. In other words, no matter the refinement of application or technique, slightly less than half a millimeter is what you get when you hand-wipe tin over copper. By the time freshly applied tin has transitioned from molten to solid state, a multitude of factors specific to tinning copper have collectively governed the outcome.
Perhaps chief among these is what is known as “geometrical selection”, which among various tin crystal grain sizes caps overall lattice height. In effect, the smallest crystal grains buttress and reinforce the erection of larger cells (merged grains) in the lattice, forming a predictable tessellation of natural growth angle preferences that approach vertical as energy exits the process. Individual grain growth and verticality are obstructed and detoured by neighboring grains undergoing identical processes, but at different phases of solidification, these being nucleation into nodules, nodules into whiskers, whiskers initiating facets, facets tessellating over sufficient surface area under “strain energy” (heat, movement and growth) and merging into larger grains (known as recrystallization), all happening along a diminishing energy gradient (a fancy way of saying cooling, which, in our process, is punctuated by quenching after the pan’s body temperature has dipped below 400℉).

Faceting properties particular to elemental tin select for geometries in which the metal’s inchoate crystalline matrix can organize in the direction of a stable lattice, while the substrate on which these crystals are formed (in the present case deoxidized pure copper) determines both the interface intermetallic compound (or “IMC”, and for pure molten tin on pure copper this would be a bronze-like pseudo-ceramic, Cu3Sn and Cu6Sn5) and the “relaxation rate”, or rate and volume of whisker extrusion from nodule tin. Relaxation is in turn the determining ground of cure time, characterized by the slowing of new whisker growth and faceting. Because copper is so thermally efficient, as a substrate it contributes hugely to system entropy and supports relatively high relaxation rates, which places an additional brake on tin’s crystal development. Some observers (Ellis, et al.) propose that IMC formation on copper substrate depletes system energy by over half before lattices in the pure tin layer even get started, resulting in lots of uniquely chaotic angles in the mechanical bond (strong “interdigitation”) between IMC and tin, while applying residual energy to the relatively orderly erection of the tin lattice out of the matrix.
So, between the natural geometries of its crystallization, an oxygen-free pure copper substrate, and entropy, tin knows its limits. The tin that is your copper pan lining is a tightly 3D-tessellated aspect of a continuous system from copper through IMC to cooking surface, which goes right on merging cells into larger grains as it’s used for cooking (cooking gives tin a thermal mass (food) into which to transit energy at specific continuous temperatures (e.g., 100℃ when boiling water), allowing for metered cell merging of fine grains into larger ones). As this happens, all the tiny “kickstand” grains at the base of newly-cured tin’s crystal matrix are incorporated into larger merged grains, which align and lattice progressively more off-vertical, all of which translates into tougher and smoother metal. It’s what we refer to as “conditioning” – a fringe benefit of cooking in your pan.
Tin wiping is popularly thought to be just about distributing molten metal across the interior surface of a pan (that’s all I thought it was for 20-odd years), and wiping does indeed do this, but the more important function of wiping is to remove molten tin that would cure over and above tin-on-copper’s natural crystalline limit. Such superfluous crystals would simply form indiscriminately over the primary relaxed matrix, in so doing establishing a uniform grain boundary separating the upper mass as a distinct, and much weaker, layer. Because this layer would not have contributed energy to an IMC nor physically interdigitate with it, its matrix would form much like that of the tin ingots with which we start – sponge-like, geometrically chaotic, finely grained and subject to rapid oxidation. Used in cooking excess tin would flake off under very little force, adding itself to dinner before adding to the longevity of a pan lining.
From a manufacturing standpoint excess tin application causes headaches for the tinner as pitting and troughs above the primary relaxed matrix become much more likely. These then have to be buffed out for utility and appearance’s sake, taking the tinned surface down to, and usually past, the crystalline limit where it could simply have been left in the first place, before adding labor and material waste.
An adept tinner feels and sees (sometimes even hears (“tin shriek”)) the primary matrix curing to its natural thickness limit as the tin is being wiped, simultaneously fluxing to continue deoxidizing, maintaining even heat and timing a uniform relaxation rate from the upper rim to the base of the pan to avoid obvious defects such as frosting, “tall wall droop” and dewetting (ridging that occurs when nodule tin fails to whisker into tessellation).

By carefully regulating heat top to bottom the tinner keeps strain energy within the system long enough to allow the tin itself to betray any areas with insufficient metal for vigorous tessellation or interdigitation with the IMC, indicated by pits, dimples or gaps in coverage, which in turn guides wiping action and material deposition moment to moment. Wipe lines and minimal dimpling are signs that the lining envelope is robust – visual evidence that curing commenced as the metal was in motion (recalling that motion and heat are key determinants of facet tessellation), that the IMC and primary matrix formed in succession, and that the metal has set up at its natural thickness limit. Sensitivity to a robust primary matrix cure also facilitates capturing excess tin from the working vessel, saving both expensive material and cosmetic remediation.
An adept tinner also knows when any one of these factors has been imperfectly realized, even if not obvious. Fortunately, copper cookware permits pretty much unlimited tinning redos – if we don’t nail it the first time, we send that pan back through (one of the reasons you seldom see seconds in tin-lined copper – and should perhaps be suspicious if you do).
And, finally, in the FWIW department, our tin prices usually pace copper’s by a multiple of about 5. In recent weeks, pure tin has been about $20 per pound, while copper’s spot price has been hovering around $3.90 per pound. Of course we use a lot more copper than tin in any given pan, and the improved price of the deoxidized copper sheet we use is many times more than the spot price, but it’s always the price tag on the pallet of tin that makes us gasp.
When applying to copper, respecting tin’s innate morphology nets the largest possible crystal grain size while establishing conditions for it to toughen and smoothen to the cook’s advantage.
If you’d like an even deeper dive, you can likely dig these up at a decent university or materials science library:
W. C. Ellis, D. F. Gibbons & R. G. Treuting, Growth and Perfection of Crystals, John Wiley, New York, 1958.
N. Furuta & K. Hamamura, Japanese Journal of Applied Physics, 8, 1404 (1969)
W.E. Hoare, Hot-Tinning, Tin Research Institute, Greenford, UK, 1948
F. J. Humphreys & M. Hatherly, Recrystallization and Related Annealing Phenomena, Elsevier Science, Oxford, UK, 2002

This website uses cookies to improve your experience while you navigate through the website. Out of these, the cookies that are categorized as necessary are stored on your browser as they are essential for the working of basic functionalities of the website. We also use third-party cookies that help us analyze and understand how you use this website. These cookies will be stored in your browser only with your consent. You also have the option to opt-out of these cookies. But opting out of some of these cookies may affect your browsing experience.
Necessary Always Enabled
Necessary cookies are absolutely essential for the website to function properly. These cookies ensure basic functionalities and security features of the website, anonymously.
Functional
Functional cookies help to perform certain functionalities like sharing the content of the website on social media platforms, collect feedbacks, and other third-party features.
Performance
Performance cookies are used to understand and analyze the key performance indexes of the website which helps in delivering a better user experience for the visitors.
Analytics
Analytical cookies are used to understand how visitors interact with the website. These cookies help provide information on metrics the number of visitors, bounce rate, traffic source, etc.
Advertisement
Advertisement cookies are used to provide visitors with relevant ads and marketing campaigns. These cookies track visitors across websites and collect information to provide customized ads.
Others
Other uncategorized cookies are those that are being analyzed and have not been classified into a category as yet.
SAVE & ACCEPT