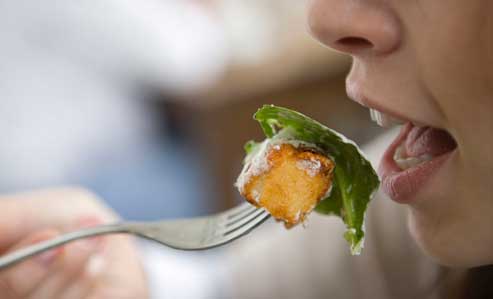 Organic: how far do you take it?

Living in a huge city it’s difficult to even stress organic, much less keep organic (in the sense that one easily keeps kosher or halal here in Brooklyn). The city is a constructed, human artifact – definitionally inorganic, right? Yet under the city, through the cracks and openings in its veneer, the organic world, the world derived of living matter, shows through. I’ll spare you the details, but to my way of thinking any city is a kind of substrate upon which nature can build. Evolution might proceed at its own lazy clip all by itself, but let humans throw down a city and nature cranks up evolution quite a bit.

Human beings are a natural evolutionary accelerator. As some species go extinct owing to our activities, others breed more robust adaptations to our going about our business of being human. Cooking is a human adaptation to the microbial world that has completely changed humanity’s chemistry and, as a result, the living environment for the microbes that call us home.

Can you see the real you?

A human body contains roughly 100 trillion cells that constitute the space it takes up. Scattered among all your human cells are a lot of bacteria; in your gut, in your gums, in the spaces between all the bits that you would call you. The thing is, you host over 20 times more microbes than human cells; in other words, there’s far less of you to your concept of your organic self than there are other life forms. Sure, many of these critters (let’s call them your support network) would die without a cellular, enzymatic you to host them, but consider what would happen to the cellular, enzymatic you without your microbial support network. You’d disintegrate – a few trillion discrete bits with pretty much nothing connecting the dots.

In much the same way, a city is a host for a great, seething mass of biological activity, most of which we never think of as anything other than human. Well, let me tell you, in my very clean apartment building alone non-human inhabitants outnumber humans by a significant multiple (something no one here likes to think about). A city is a scaffold on which a lot of overlapping organic activities take place, with most of them getting a better toe hold for having other projects going on in the vicinity, or under foot.

Our bodies, our Gotham.

In New York City people come from all over the country and the world to hook into Gotham’s friction and relentless creative energy. We’re packed to capacity with potentials here (like for making, oh, I don’t know… copper cookware maybe?). The idea of the city is analogous to the idea of our bodies; we may look upon it as monolithic, singular thing, but in fact both are constructs, more idea than reality, and more full of life and creativity than meets the eye. Both live and die on the basis of what goes into them to support them.

So, what does this have to do with copper cookware? Through cooking, humans became a filter for certain microbes invited to thrive while others were turned away to toil elsewhere. We were always mostly microbes, when we began to cook we started being selective about who we let in our house.

Humans have not only succeeded, we’ve picked up the evolutionary pace significantly in the short period of time we’ve been around and have taken all our guest bits along for the high-speed ride. As we prosper so too do the trillions of critters to whom we give room and board, and without whom we would cease to exist. When we cook food, we’re staking out a position in deference to what our human cells understand is good for them and the microscopic roommates with whom they integrate.

There is much talk today about what is happening to the human body, and how it’s unprecedented in human history. What that looks like is something other than thriving, something other than an honoring of the cellular us or the microbes that hold us together. Over the last century or so we in the United States have supplanted our biological relationship to food with an economic relationship, and begun stressing cheap, nutritionally barren inputs that prop up demand for themselves while weakening our bodies and all the other living things, intrinsic and extrinsic, that support us.

Our cities have adopted an analogous emphasis. It used to be you could tell where Dallas ended and Ft. Worth began. Same with Phoenix and Tempe. LA and Pasadena. Used to be Flatbush was the forest primeval.

Of making food and making messes.

While we have increased leisure and reduced friction (think dishwasher-safe, non-stick) we have declared ourselves anti-biotic (literally, against living organisms). The results of this view of food, cooking and the process of life itself, are to be seen all around these days. While it’s important to make exceptions for run-away e-coli and other belligerent microbes, eating and living are not “sanitary” affairs, not for the cellular, enzymatic us. In fact, I think the best things in life are, well, pretty messy (think about it). Cooking and eating prop up the entire ecosystem that ends up being you; you, the surging, buggy, only-5%-cellular you. You, the scaffold upon which spirit and matter collide, where the friction of life happens, where the cellular and enzymatic remains of other lives show up as room service for your microbial hotel guests.

The economic view of food is contemptuous of biology, which is, literally, the logic of life. E.coli run amuck? Like a bad guest who trashes the room, maybe even burns down the hotel (but when well-behaved a welcome contributor). However, the industrial-food complex finds a lot of added value in the threat of blooming e.coli, listeria and other bad actors; they prop open the sales channel for Big Food’s partners; Big Agri’s growth hormones and pesticides, and Big Pharma’s antibiotics, mostly to calm fears that Big Food engenders in the first place by having industrialized the very conditions human pathogens favor. Of course, residues of those chemicals end up intruding upon the symbiosis that is you. And not for nothing: Enter Big Med. Treating the consequences of bad diet is its own multi-billion dollar business. Goodbye natural food chain, hello industrial supply chain.

A new shade of green. A new copper age.

Our subtle structures are also influenced by the way we cook. The industrial view keeps the pipeline filled with the latest and most tricked-out uses for its products, and makes everything disposable to foment demand. PTFE (polytetrafluoroethylene)? An industrial accident that showed up as the cheaply polymerized form of that first great ozone defiler, Freon®, and went on to generate incredible profits when applied to cookware and sold as fat-free non-stick. I feel safe guessing that the gifts PTFE keeps on giving are compounds neither you nor your guest microbes want using the facilities. Again, would anyone consciously fill the shaker on the table with polytetrafluoroethylene?

I hope the foregoing has made the point about what we mean by deep organic, why tin-lined copper cookware fits into the deep view, and why we decided to make it and sell it. It’s simple and elemental. It’s pre-industrial. It uses very little energy and takes the least energy to make. It does the work best. It lasts pretty much forever. It supports you in all the ways you could possibly be.