Getting a Handle on Made in America

Getting a Handle on Made in America

If you’ve read anything of the main Brooklyn Copper Cookware site, it’s probably clear that I was not born, trained nor ever even politely introduced to manufacturing of any sort before I determined that making cookware was somehow a smart career choice for my so-called “second act”. I have the great good fortune of having partners to whom the complexities of raw material sourcing, machine-tool operation and maintenance, labor relations, regulatory tangles and such other of the daily challenges of making actual things are well understood.

Upon getting BCC started I met my first manufacturing partner through Harry Rosenblum, the affable owner of Brooklyn Kitchen, the place where I first saw Hammersmith’s handiwork based on the classic Waldow designs: 14 gauge copper, hand wiped interiors, brass handles. Harry very kindly gave me the only phone number that reliably got through to the shop, which along with dropping Harry’s name got me my audience for the first of the many 1 minute pitches I would have to make in the next couple of years. That one went something like this:

“You know those custom pieces you make for Harry? Whaddaya think about a heavier 2.5mm wall, hand wiped, iron handles instead of brass, a mash-up of the pure organic metals with the pure American form? I’ll set up the company and we’ll put American-made copper cookware back at the top where it belongs.”

The negotiations were short and an interesting story in their own right, but what was most compelling at that moment was to see if the old Waldow tooling would stand up to the specification I was talking about. We needed to make some prototypes – the very first Hammersmith pots.

The form of the vessels, or “blanks” as they’re known once they’ve been spun on a lathe from a piece of flat copper sheet (a “penny”) came out beautifully using the heavier stock. Tinning heavier weight blanks is a challenge that took a little re-jiggering of the old Waldow techniques and wasting a few blanks on getting the acids and molten applications tweaked (some of the slightly misshapen pieces that formed the beginning of my personal Hammersmith collection).

And then there were the handles. 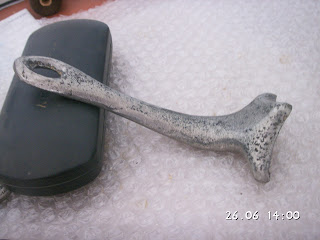 Cast iron has two very desirable qualities for copper cookware. First, it conducts heat slowly, so it stays relatively cool verses the pot it’s attached to. Second, iron can be smelted so its coefficient of expansion (meaning the rate at which it expands and contracts as a function of energy going into and out of it) is very similar to copper, despite the two metals vastly different thermal conductivities. This means there’s less stress on the joint between handle and pot. I naively thought that getting the appropriate castings would be no more difficult than, say, stumbling upon the country’s last spinner of legacy copper designs in my own backyard.

We spent a tidy chunk of startup capital shattering test castings as we riveted them to their pots. The examples we were getting were simply being smelted and tempered too hard. Not being metallurgists we could describe the application to to a potential vendor, and assumed they’d figure out the formulation and tempering requirements. This, as it turns out, is a far more delicate balancing act than one might guess – hard enough to not crack under the load of a full stock pot, but ductile enough to form to that stock pot’s side under the riveting hammer without deforming the relatively soft copper wall.

The pain-staking solution that Hammersmith came up with was to measure the curve of the pot a handle was to be fitted to, and then hand grind the face plate of each handle to that curve before riveting. This was an OK solution while prototyping, but it was threatening to make the iron scraped off the unseen part of every pot’s handle a huge part of each pot’s cost.

The upshot: Finding a casting shop to formulate and temper what is called ductile iron to ever so slightly bend to the varying curves of a bunch of copper pots is a manufacturing discipline it is now very hard to find in this country. We’re still looking. In the meantime, hand grinding handle face plates is how we’re getting along, as the Hammersmith crew grouses with some justification that the beauty of the old brass handles was that they flexed home to form a tight joint as the rivets were applied.

True enough, but iron is how copper cookware was equipped for centuries, it’s how our competitors in France do it today and what getting it right amounts to is a little metallurgical trick we just have to root around and find again on the highly fragmented American manufacturing landscape. When the US did a lot of the kind of work we’re doing, specialized iron fittings could be found all over in all sorts of hardnesses, especially in Brooklyn, where a great many of the major architectural components for the iron facades in lower Manhattan or Newark’s “Ironbound” district originated.

I learned very quickly that I could get the right handles made in Romania, perfectly tempered and tumble finished in quantity, FOB at JFK Airport, for less than we were paying to have not-quite-right castings made in Pennsylvania. Someone else might call that a solution to the business problem (the French and Belgians do; Romania exports a lot of cast iron handles to those countries), and since we’d still be assembling in Bushwick we’d be able to say our pots are “Made in America”, but then we’re getting away with something we think is symptomatic of a larger problem, which can be summed up with the (rhetorical) question: “Does anybody deliver what they promise anymore?”

As far as making anything in the US these days is concerned, it’s our experience over the past couple of years that, while it’s possible to deliver on promises, it’s very tricky to promise an truly American made product anymore. Ask Dean and DeLuca. They recently came out with a beautiful line of hand-made copper cookware that they are selling under their own boldly stamped private label. It’s brilliant, both as cookware and as a business maneuver, and I respect D&D for being first out of the gate with most of the ideas that have changed the food world in the US since their founding in the early 1970s. Their wares are designed by Amoretti in Italy, the same folks who do work for Ruffoni.

The pots themselves, however, are a little more quietly noted as being made in Mexico. Lot’s of good copper in Mexico (same veins that come into New Mexico and Arizona, where we source our stuff), lots of skilled smiths, and the Mexicans have kept those old-time skills alive such that their genius shows up on the shelves of top-flight retailers as something the purveyors are proud to put their name to, and for which a living wage is paid in Sonora. D&D is selling their pots for a lot more than we’re selling ours, for which living wages are paid in New York City.

Maybe some of you remember when Ford tried passing off their Merkur as some sort of European high-performance confection, or GM hung tags like Eurosport 6000 on their garden-variety Pontiacs. There’s a lot that we have to get over as a culture (and as an economy) for the cache of “American-made” to not be merely a reaction to the rise of other economic powers, such as China today, but as worthy in its own right because American-made is simply the best you can get anywhere.

To us, then, it’s critically important that our Brooklyn imprimatur also be trust-worthy, that when we say our goods are made in this country that they are not merely assembled here, that their quality inheres in their authentic abilities and execution, not in the conceit of a red, white and blue sticker or shallow jingoisms, that every bit of what you’re buying from Brooklyn Copper Cookware originated with the remaining American ability to make things, things people need and that are worth having, and are worth paying for.

Yes, it takes us longer than it should to make something as simple and elemental as a cooking pot, even by hand, but we’re getting it figured out; literally and figuratively getting a handle on it.