How to Cook Up a Scam. 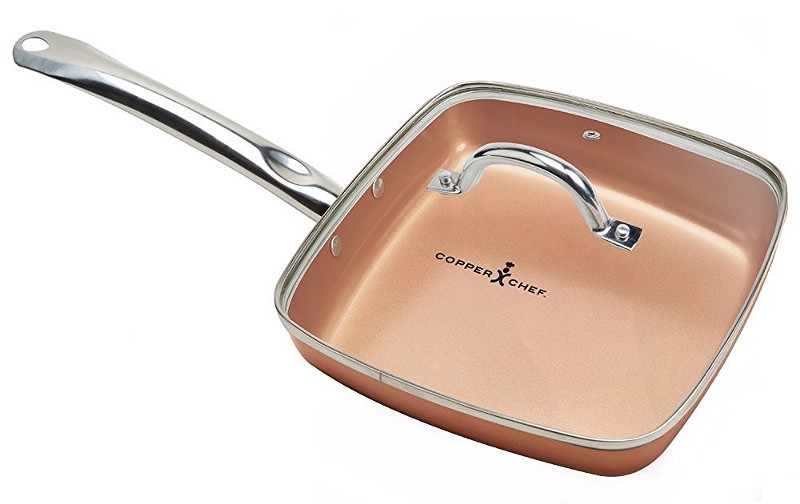 How to Cook Up a Scam.

Just a few months from now it will be a wonder that anyone could ever have been lured in — the hyper-promotion, the audacious lies, the incoherent gibberish, the lack of substance, even the artificial orange tinting — it will all have been so obvious… so avoidable. “What was I thinking?” is already falling from remorseful buyers lips. Belief in ideas that have repeatedly and unambiguously been exposed as defective, even dangerous, often by conspicuous promises to solve problems people don’t in fact have, is a stubbornly tragic leit motif of human history.

At Brooklyn Copper Cookware we get more than a few inquiries about the proliferation of “copper” non-stick pans squatting ad space in popular media these days. We’ve looked into a few of these products, hoping to spare you the trouble of doing so yourselves. Better yet, to spare you the regret of spending good money on bad tools.

The 7 Signs of Highly Misleading Marketing

7. Gotham Steel (made, like its brethren, not of steel but of copper-colored aluminum by Ningbo Zaixing Kitchen Ware Co., Ltd.)

Any traces of copper cookware such as “Red Copper” and its illegitimate brethren might contain is purely incidental — the detailed product description on the manufacturer’s Alibaba.com listing for the pan above states that the outer coating treatment is “high-temperature resistant paint”.

So, what “infusion” of copper as there may be could perhaps (and then only charitably) be viewed as pigmentation. These products are made of pressed aluminum sprayed with a garishly colored, silicate impregnated liner, the visual effect of which being the sole basis upon which the rhetorical association with copper is made.

Obviously, the word “copper” is used here as bait.

Contrary to what the appearance of these pans would have anyone believe, copper is not to be directly cooked upon other than in very specific circumstances, such as when preserving or making meringues. Authentic copper cookware is lined with an inert metal, often tin or stainless steel, which positions a barrier layer between the the conducting metal and acidic preparations. The products we’re talking about here flaunt their would-be copper “infusions” precisely where knowledgable cooks would least desire that metal to appear.

There being no copper about these pans, one could reasonably ask “is coloring a non-stick surface in a crayon copper hue such a bad thing?”

No more than coloring a non-stick lining green in order to market it as capital G “Green”.

As seen on TV!

Helpful color-coding notwithstanding, and unlike copper, green is not a complexion natural to metals, clays or other materials from which cookware could conceivably, much less safely, be made. The failure of green-colored non-stick surfaces in the cookware market is not mysterious: People didn’t buy the pans because they didn’t buy the green-washing.

The few who did buy these pans quickly discovered that what was most green about them ended up as plasticine flakes and chips in their food.

Having convinced a large swath of the eating public that cooking without fat is “healthy” while encountering ever more suspicion about the cooking-in-plastic-is-perfectly-safe fiction, how does a marketer get people to buy the successor to Teflon and its perfluorinated petrochemical-based analogues? Why, dress the same basic product in such a way as to ennoble it by association!

When polymer-painted “green” pans failed to catch on, the updated hustle would entail clumsy mimicry of prestige cookware optics and re-saturation of on-line and television ad space with obtuse suggestions of copper-like performance. A new infomercial star was born.

This would all be far less troubling were the products in question at all worthy of the name cookware. Have a look at reviews on Amazon and elsewhere in the wider web for any of the products listed above; $19.95 buys 2–3 stuck and ruined dinners before the lining begins to degrade, and/or the pan body warps like a potato chip, and/or, in the case of “induction-ready” models, the steel induction plate violently delaminates.

Not surprisingly, marketing budgets for cheap wares include fabricated reviews. Almost all the positive reviews for any of the products above are posted within the same few calendar days following the product’s debut, whereas the critical reviews are uniformly more recent.

(By the way, “cheap” is not my word here, it’s in fact used often as a superlative in manufacturers’ listings for these pans, as in “Aluminum Non-stick Ceramic cheap & quality copper/Frying Pan!”)

Even if one succumbs to the ridiculous “seasoning” preparation recommended in the enclosures for many of these pans (the cookware-care equivalent of watering plastic flowers), the aluminum-dressed-in-copper-drag act collapses soon after getting one of these things on your range top. Between a flyweight, low-density stamped aluminum body, hollow metal or plastic handle and microns-thin copper-colored spray laminate, any of these pans will spend less time working for you than they did at sea in a shipping container.

Whatever else these products may have been produced to do (like make 400% profit margins), they do not tolerate being used for actual cooking very well, or for very long. The same twenty of your dollars could be spent on a 2mm carbon steel pan from any of several manufacturers. Seasoning of carbon steel is a meaningful gesture in that it provides a durable and renewable non-stick surface in a pan that will provide good, trouble-free and non-toxic service for decades. In addition to tin-lined copper and cast iron, simple steel is a genuine article, something the copper-tinted-poser crowd would like you to believe they are.

Hucksterism reliably proclaims its own virtue loudly in the public square. On the bright side, I suppose it’s not the worst thing in the world for makers of authentic copper cookware that hucksters think copper has caché in the popular consciousness. I certainly don’t worry about anyone forming a false association with, or impression of, BCC’s wares, but I do regret that so many more chunks of metal with sand “infused” toxic plastic coatings will be in landfills by the time the junk peddlers have moved on to their next con.