Sometimes what you’re making demands it. 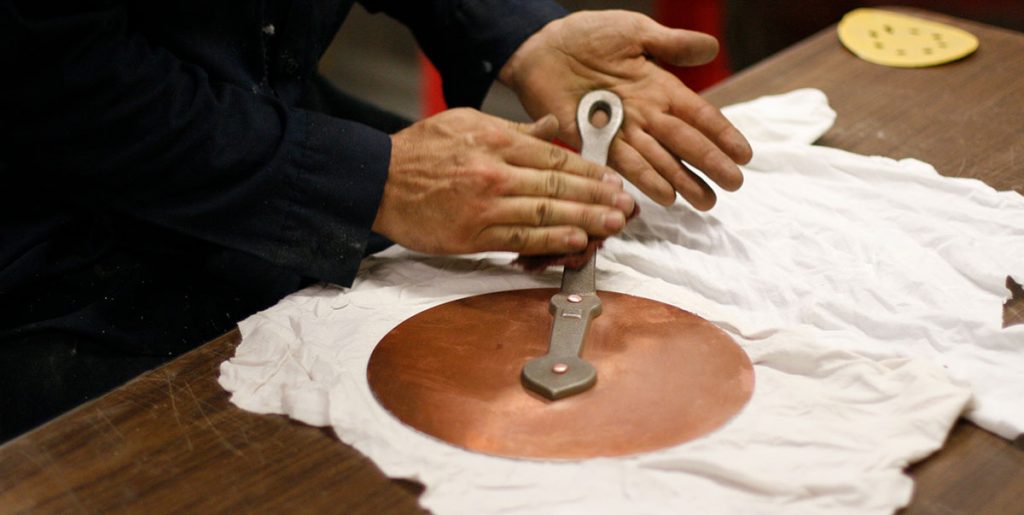 There was an interesting article in The New York Times a few years ago that prompted the title question of this article.  Brooklyn Copper Cookware (BCC), produces hundreds of pots, pans and covers at a time, entirely by hand. At least in the case of copper cookware it’s not defiance of modern, more efficient or more cost-effective methods that motivates the hand-making process. If one respects the nature of the material and the purposes for which any cookware is intended, making it by any means other than by hand suddenly seems almost an impertinence.

As the Times article notes, a great many manufacturing jobs have been lost to automation. Those that caused, at minimum, repetitive stress injuries (or, at most, death) were first to go, and now machines are starting to show aptitude for skilled service tasks, such as contract negotiations and medical diagnosis. Automation has effected human employment much more than the outsourcing our politicians are fond of citing. It’s no secret that even in China manufacturing that can be done more cost-effectively and safely by machines is, well, done by machines (very often German and American machines).

To do justice to both the metal and the history, you have to get your hands dirty.

As (very) cool as hand-made is, sometimes from a purely practical standpoint the hands and five senses of a human artisan are simply best, maybe the only, means by which to make certain things properly. When it’s copper cookware you’re making, to do justice to both the metal and the history you have to get your hands dirty. 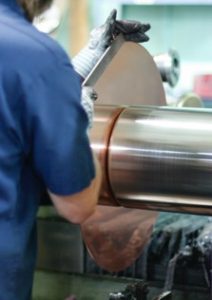 Centering on the mandrel

Copper, being soft and fiercely conductive, toughens quickly when worked. Thin copper can be worked on an automated lathe because its structural and mechanical resistance is relatively low. Thick copper “bell tempers” at the same rate as thinner material; its thickness, however, makes it more structurally and mechanically resistant. Every inch of its progress up a lathe mandrel (the tool over which a pot or pan is formed) represents a different degree of toughening. A risk is that the metal will “seize” (i.e., harden enough to produce a bell-like ringing) before it’s fully formed. Any working past this point can split or warp the metal.

An equal risk is that it will not be sufficiently work-hardened once formed. Copper starts very soft and is toughened in the spinning process in part so it can support its own weight over decades and centuries. The smith endeavors to strike an ideal balance by attaining bell-temper just as the pan is fully formed.

Each piece of copper mounted on the lathe will behave slightly or substantially differently than the previous piece.

The smith not only has to be moving the copper manually to feel the change in the metal, but has to actively listen to its tone as it’s being worked. That operator knows how much time he has left based on how the metal sounds and feels, so he “flops” more or less quickly in order to synchronize the work-toughening of the metal and its complete formation on the mandrel. A skilled coppersmith is said to be “saved by the bell” because he can coax the ringing tone just as the piece is perfectly formed.

Spinning heavy copper cookware may be iterative (we make many sauté pans in a run), but it is far from repetitive. Each piece of copper mounted on the lathe will behave slightly or substantially differently than the previous piece, so absent a fine sensitivity to its behavioral cues, a smith could easily transform an expensive slab of copper sheet into hard, misshapen scrap or a pretty shell too soft to support its own weight.

And then there’s tinning.

The automated version of lining copper in tin is electroplating. This is a method of electrochemically depositing tin on copper, but as a passive process, and even for only cosmetic coverage, electroplating takes time. Most electroplated tin measures between 20 and 50 microns thick (1 micron is 1/1000 of a mm) after 30–45 minutes. To withstand the rigors of regular use in cooking tin must be thick; laying up the .4 — .45mm thickness needed is done by hand in less than 15 minutes. The same thickness would take 10–12 hours in a “rack” electroplating tank. Once again, there’s no substitute for hand workmanship here. 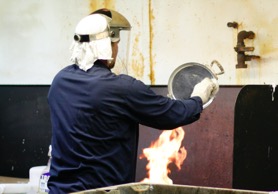 Hand wiping over an open forge

And the hand that succeeds at wipe tinning has the deftest of touches. Between managing a heavy pan that has been heated to over 600℉ and ladling 500℉ molten tin into it, flame, steam and smoke compromise a good deal of visual perception. A tinsmith is literally feeling his way through the process, sensing at his fingertips the flow and crystallization of the tin as well as the steady cooling of the pan, all the while compensating for temperature and humidity in the shop. This is all done reflexively (or intuitively), taking about a minute once a pan is prepared and heated. As with jazz, there are years and years of exhausting practice on display in every effortless riff.

Another way to think about it is that tin and copper give a smith about a minute to arrange and consummate their “marriage”. When getting together, should timing, temperature or some other factor be inauspicious, tin and copper have a conveniently natural attraction; tin goes back to the pool, copper gets itself cleaned up, and you simply arrange another date.

Tinning by hand, we attain in less than 15 minutes what would take 10–12 hours in an electroplating tank.

BCC’s handles have a slightly different story, one where quality and safety are better left, at least partly, to a machine. The ductile iron casting foundry that casts BCC handles uses the Roberts-Sinto process, which requires just three operators to manage a machine that is capable of producing thousands of castings from BCC’s match plates (casting tools). This is a lot faster, cleaner, safer and much less wasteful than hand-tipping a crucible of molten iron into a casting flask. During the early industrial revolution the “cope and drag” casting process took two laborers walking the casting line, decanting red-hot iron until they ran out, or the iron crystallized, or they collapsed from the heat and effort. In those days the guys who got to keep their jobs consistently decanted all their molten iron at the correct flow rate and managed to return time and again for red-hot reloads. These were not the good old days of American manufacturing.

Even if the hot part of the iron casting process is now automated, each new handle is still individually treated and inspected to prepare it for its pot. Once cast, the metal has to be deburred and hand-finished to remove casting residues and sharp edges, and to ensure a uniform finish. 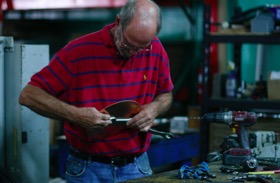 Perhaps there are automated systems capable of making BCC’s pans, but let’s face it: The demand for heavy copper cookware is small and the smithing required to make it is subtle, changeable and complex.

To automate the process would take several very sophisticated machines with dozens of sensors mimicking not only human sensitivity but human-like ability to make continuously variable ad hoc judgments and adjustments (i.e., something like real artificial intelligence).

And for what? To produce relatively small quantities for a niche audience with a clear preference for hand-made goods (for instance, their own dinner). As a business proposition, it’s a rare case where robots are cost-prohibitive in a manufacturing context, whereas for thousands of years all that has been needed to make copper cookware has been easily managed by two opposing thumbs and five senses.

We use sharp tools to cut and shape our raw materials and heat to transform assembled ingredients into something we’re happy to bring to the table.

I don’t care to have anything BCC makes cause unnecessary risk to anyone involved in making it, but anything made by hand puts at least those hands in harm’s way, so we’re thoughtful about all our processes. In the case of casting ductile iron handles we let a machine manage the truly dangerous stuff, which has the added benefit of making for a much cleaner process. In general, however, the kinds of risks BCC smiths take in the shop are not so different from those you and I take in the kitchen; we use sharp tools to cut and shape our raw materials and heat to transform assembled ingredients into something we’re happy to bring to the table.

Making copper cookware resists being done by machine because, like cooking, the process is by nature imprecise, and it’s imprecise owing to the character of the materials themselves. Pure copper and pure tin have personalities which do not lend themselves to being led quietly by robots, but instead reward the human touch, as much in the fabricating as on the cooking side. Copper cookware is justly prized for cleanly conducting energy, and all the forms of energy that go into it when it’s made may be as important as the energy that comes out of it in the form of dinner.

The politics and economics of American manufacturing can be spun lots of ways, but when it comes to making heavy copper cookware, that’s best spun by hand or not at all.